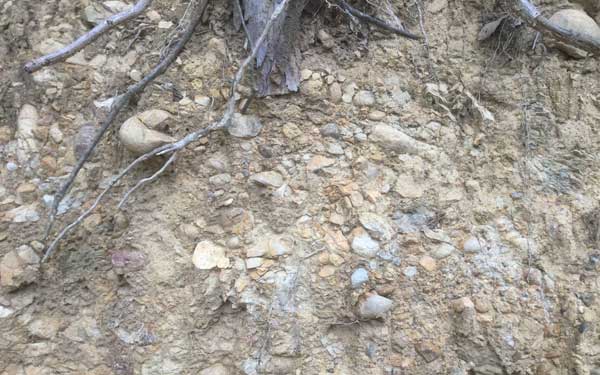 Akashina Tennohara, Azumino City, Nagano Prefecture, is located on the left bank of the Takase River, at the eastern foot of the Northern Alps Mountains, which runs in the central part of Japan.
The Azumino region was a U-shaped sea that opened to the Sea of Japan about 3,000 years ago, where debris such as gravel, sand, mud, breccia tuff, and volcanic clastic rocks such as tuff has accumulated.
Sedimentary basin began to land conversion from 2 million years ago, and mountain gravel was brought in from the Northern Alps Mountains from 600,000 years ago.
Akashina Tennohara is located on the eastern side of the Alps, across the Azumino area, and in the region on the gentle slope of the southwestern side of the Oanayama Mountains called [Higashiyama], which consists of a brittle conglomerate layer at an altitude of 600 to 1000 meters.
It is a slope of 10 to 15 degrees from the flood plain on the left bank of the Takase River to the foot of the mountain.

It is reported in the area that there was a landslide at the time of the Great Zenkoji Earthquake in the Edo period, so it seems that the hinterland mountain soil forms the topsoil.
Since it mainly consists of gravel soil and sandy soil with little clay, it has excellent underground penetration.
(Reference: The first volume of Akashina Town History)